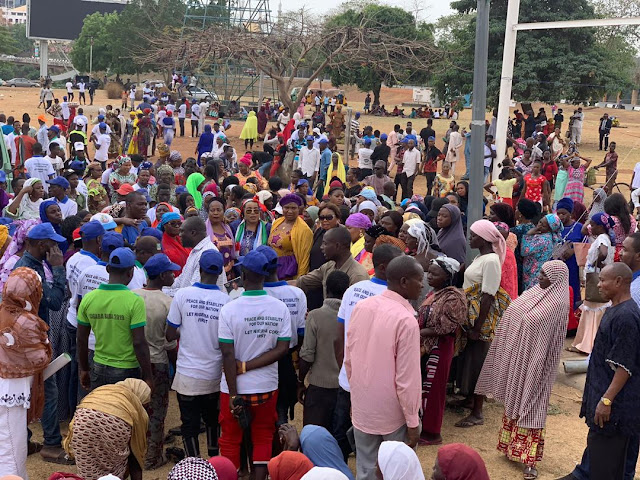 This appeal was made by Two Million Women Rally for Democracy on Friday.
Mr Buhari of the All Progressive Congress (APC) was returned as president for a second-term by the Independent National Electoral Commission (INEC).
While the incumbent has continued to receive massive commendation over a free, fair and credible polls as well congratulatory messages from both local and international communities, the opposition has resolved to contest the people’s mandate. 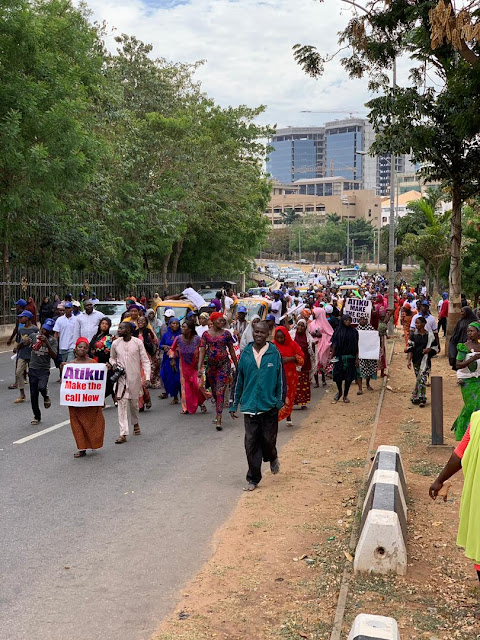 In a statement by Convener, Mary Onuche, the Two Million Women Rally for Democracy has advised Mr Atiku to quit his on-going disruptive stance on the election.
According to the group, although the PDP candidate is within his constitutional right to seek redress, such disruptive and frightful atmosphere could lead to an a anarchy.
“ Fortunately for Nigeria, our democracy, though still young, has continued to evolve in ways that reassure us that things can only get better. One such leap is the development in 2015 when the then President Goodluck Jonathan called to congratulate the then winner of the presidential election, incumbent President Buhari, even before the votes’ tally was completed. That singular act of patriotism is today hailed as the benchmark of the level of statesmanship befitting of candidates in our elections. May God bless President Goodluck Jonathan, the hero of our modern democracy. 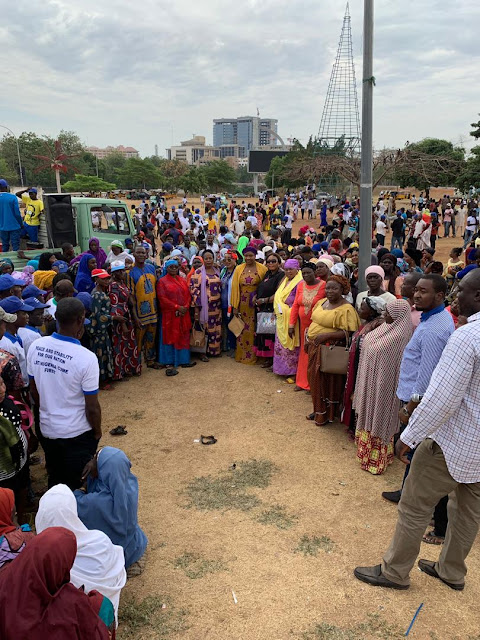 “ This has become a modern democratic culture in Nigeria for which former President Jonathan will continue to receive accolades. Had he acted contrary at that time, perhaps democratic growth in Nigeria might have been stunted or even truncated.
“ But thankfully he set the benchmark, a standard that we today expect from anyone that takes part in the presidential election.
“ We therefore call on Alhaji Atiku Abubakar to emulate the statesmanship of President Jonathan and quit his on-going disruptive stance on the election. There has been series of calls on him to call and congratulate President Buhari as the winner of the election, which would infer that he would by consequence give up any legal challenge of the election result. We are tempted to align with the first half of this demand that Atiku calls President Buhari to offer his congratulations but we will not suggest that he forfeits his right to seeking judicial redress. He is very free to approach the courts to ventilate his grievances.
“ What is unacceptable, however, is the adoption of positions and making of utterances that are being interpreted by his supporters and party members as a call to violence. We have become aware that his supporters are strategizing for violent protests that they are targeting to cause chaos nationwide and bring down the government. Some of Atiku’s lieutenants and political associates are subtly encouraging such protests through comments they have been making in the mainstream media and their social media accounts.
“ The hostile environment being created by Atiku’s stance has been made even tenser by his reported demands on President Buhari, made through the National Peace Committee. Such behaviour suggests an opposition that has transmuted into a dictatorship, one that is hell-bent on blackmailing the country to impose itself on the people when it has been clearly rejected at the polls. This is not acceptable at a time when Nigerians expect that anyone that aspired to govern the country would at the very least imbibe the spirit of sportsmanship championed by former President Jonathan.
“ Our democracy comes first before the personal fixations of any politician. We insist that the peace accord signed by political parties and their candidates, including Atiku must be respected .
“ Nigeria truly deserves peace and stability at this point in time, which is why we are holding this “Two Million Woman Rally for Democracy in Nigeria” to demand for national stability and peace in Nigeria.
“ While we remain apolitical, we are encouraged by the assessment of international election observation missions, which in-spite of their earlier tilt in favour of Atiku prior to the election, have come out to declare that the conduct and the outcome of the poll was satisfactory to them. We suggest that Atiku takes time to slow down and listen to his foreign allies who have now concluded that even the Parallel Vote Tabulation they used as control showed that the PDP candidate was fairly defeated. “