Amazon To Pay $500m As Bonuses Globally
Spread the love
A coalition has raised alarm over an alleged plot by Governor Nyesom Wike of Rivers State to overthrow the government of President Muhammadu Buhari. 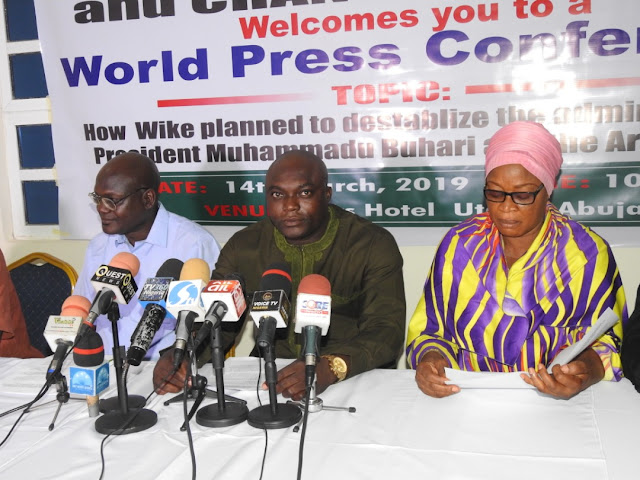 It would be recalled that after Governor Wike’s failed attempts to compromise the military, he resorted to arming thugs and even bribing some foreign observers to propagate propaganda and fake news about the general elections and Nigerian Army.
This latest plot by the embattled governor, who appears to be running short of schemes, was again uncovered by the Coalition for Good Governance and Change Initiative in an emergency press conference on Thursday in Abuja.
According to the National Coordinator, Comrade Okpokwu Ogenyi, an utterly frustrated and desperate Wike has strategised with foreign-trained mercenaries to shut down Abuja, stretching to other parts of Nigeria – in the guise protests.
The statement further revealed that this violent exercise would be portrayed as a backlash against the outcome of the election in Rivers.
However, the group advised Mr Wike to be brave and accept rejection by his own people rather than embark on a self-destructive mission. 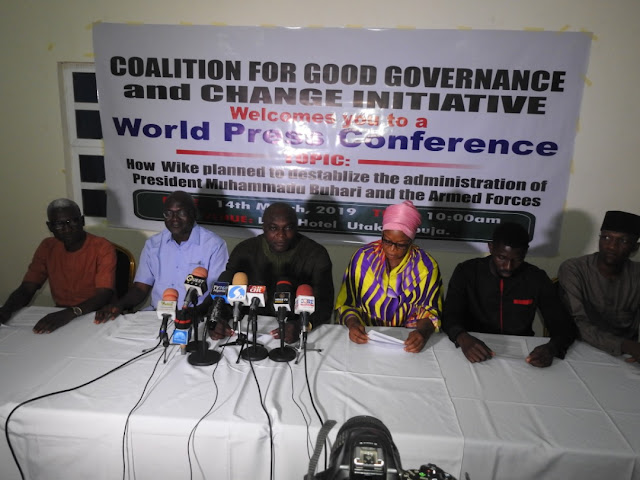 “What we uncovered is a plan by the Rivers state governor, Mr Nyesom Wike to overwhelm and shut down Abuja with violent protests. The protestors would reportedly claim their actions are in response to the outcome of the election in Rivers state. The protests in Abuja will be used as a cover to infiltrate the nation’s capital with militants, some of who have trained as terrorists abroad.
“ The intention is for these militants to blend with the population in Abuja and start planting bombs and attacking residents in terror attacks. There are a series of threats from the online units of these militants that prove this aspect of the plan. Should the Abuja leg of the protest succeed, other cities will become victims of the violence, bombings, arson and looting that are the agreed modus operandi of the protests, which is meant to anger other citizens and provoke law enforcement agencies to deploy corresponding force in restoring normalcy.
“ This will then be flagged as repressive by Wike’s foreign partners. This campaign of calumny, planned by Wike, would be branded and promoted as popular protests against President Muhammadu Buhari and the Nigerian Armed Forces. Wike’s Adviser on Media, Simeon Nwakudu has been mobilized with an estimated N200 Million to execute this evil plot. Nwakudu has been in touch with point person for election losers across the country. He has instructed them to be on standby to mobilize protests against their losses, even when the candidates that did not win are well aware that they lost for other reasons.
“ These disgruntled elements have also procured the services of foreign news channels that will report their paid protests as representative of the aggregate view of Nigerians and thereby undermine the credibility of the elections and the legitimacy of those declared winners. These paid protestors will be accusing President Muhammadu Buhari of deploying the military to intimidate voters during the elections.
“ What Wike, Nwakudu and their co-travellers are trying to divert attention from is the treasonable crimes of the Rivers State governor, who created and used a fake military against the people of his own state. Had he stopped at just sewing fake Army and Nigerian Air Force uniforms for the militants he assembled to impersonate the military his crime would have been considered minor, but he went to the dangerous extent of putting weapons in their hands.
“ The resort to arming and sewing military uniform for hoodlums was after he failed to bribe military officers to disobey lawful orders. The information we have is that Wike would have paid foreign currency to any military officer that proves unprofessional for the purpose of overthrowing the federal government. His inability to bribe soldiers to manipulate the elections for him, failure to rig the same election with fake military and the refusal of conscientious officers to overthrow the government for him has now made him to consider using a rabble of protesters to achieve the same purpose. 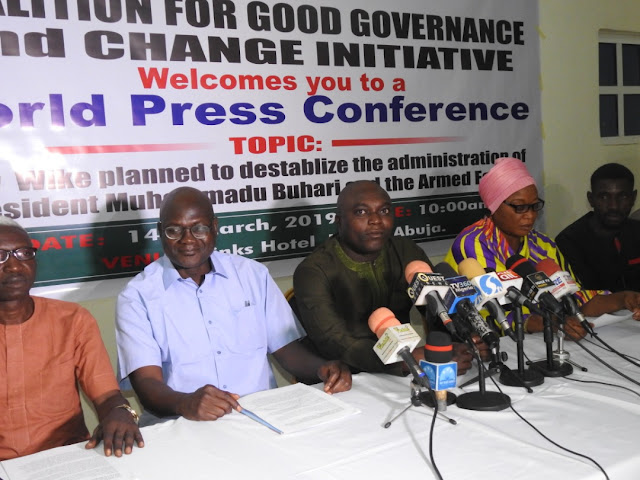 “Apparently because of the indifference with which his acts of treason have been treated, Wike has now taken his attack on the Nigerian state further by trying to overthrow a legitimately elected government using the so called “Venezuelan Option” by flooding the streets with violent protests. The objective of mobilizing people into the streets in this instance is not to express grievances but to shut the country down, induce security and military personnel to join their rebellion and get endorsement from greedy foreign countries.
“ We challenge Wike to be bold enough and come out into the open to challenge President Buhari since he is not brave enough to state his intentions. He should stop beating around the bush. We further challenge him to be man enough to face and accept his rejection by the people of Rivers State. If he were as popular among the people of his state as he claims they he should have garnered votes that give him outright win at the polls with the kind of percentage difference President Buhari won over his closest rival.”