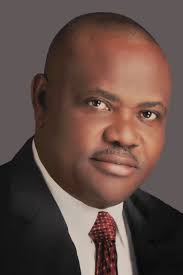 The Coalition for Nigeria Movement has called on security agencies to apprehend Governor Nyesom Wike of Rivers State over various cases of propaganda attacks against the Nigerian military and treason on the entire nation.
Mr Wike was reportedly at the centre of a desperate attempt to rig the just concluded general elections, going as far as arming thugs in military uniforms .
In a bid to enjoy a smooth sail, the governor requested for the withdrawal of military personnel in the state which apparently fell on deaf ears.
The Coaltion for Nigeria Movement, in a press conference, Wednesday, in Abuja, believes Mr Wike formally declared war on Nigeria by setting up his own military and launching physical and propaganda attacks on the Nigerian military.
According to its president, Sabo Odeh, by setting up a parallel military, Wike has committed treason for which he must be immediately arrested and put on trial, irrespective of his immunity.
“The first inkling that Wike has a hand in the instability bedevilling the state was his sponsored resistance to the deployment of the military to provide cover for the elections. This opposition to military deployment was made to appear like a popular demand but we now have evidence that the state governor sponsored the resistance because he was aware that he has his own horde of fake military men on the prowl all over the state such that he did not want the Nigerian Military to discover that they were being impersonated.
“ During the conduct of the Presidential and National Assembly Elections, Rivers State was the only state where gunmen attacked troops that were on election mission and killed one officer in the process. That confrontation led to troops gunning down six attackers. This failure on the part of the armed militants did nothing to discourage Wike to relent. Instead, he amped his evil strategy.
“By the time the state elections were holding, Wike has activated another layer of his evil plot. His militants, operating under the innocuous appellation of ‘Neighborhood Security Watch’, had failed to deliver the level of violence and voter intimidation he desired. Wike thus decided to arm these same militants and kitted them in Military uniform. They were unleashed to destabilize the elections in Rivers State while violence was directed against citizens on an epic proportion.
“ The essence of this strategy was soon made known as the United Kingdom latched on the manufactured videos to accuse the military of attacking staff of the Independent National Electoral Commission (INEC). We have however been able to establish that the military the United Kingdom was referring to were the militants kitted and armed by Wike. He used this strategy to rig the election and at the same time make Nigeria appear bad to the international community.
“ The aforementioned are however mild compared to the long term security risk that Wike has created for the country. It is apparent that he has no record of the militants he gave uniforms and weapons to so it is impossible to track, apprehend, demobilize and rehabilitate them for re-integration into the society. These youths that have been armed will soon form new militant and terrorists groups that will engage in kidnap for ransom and attacking economic interests in the Niger Delta.From the viewpoint of the Constitution, what Wike has done is to create a parallel Military Service since the people he gave weapons to were once Neighborhood Security Watch members. Taken against the background of his utterances, Governor Nyesom Wike has formally declared war on Nigeria by setting up his own military and launching physical and propaganda attacks on the Nigerian military. We have seen how this unfolded in states like Benue and Taraba where the governors empowered militias to embark on genocide so it is important that steps are taken to urgently arrest the situation.
“ The Coalition for Nigeria Movement has concluded that Wike’s action, in setting up a parallel military, amounted to treason for which he must be immediately arrested and put on trial, irrespective of his immunity. Where the Federal Government fails to arrest Wike, it must direct, on the strength of evidence on ground that INEC does not conclude elections in Rivers state so that the governor’s tenure can end and his immunity lifted.
“ Only when Wike has been arrested can Rivers state have the peaceful environment that will make it possible for credible elections to hold.We call on the military to go beyond alerting the public to the kitting and arming of militants to pose as its personnel in Rivers state. The military should step in with the necessary and permissible force to arrest all those impersonating it in Rivers state as this is a critical step to preventing the resurgence of terrorist groups in the Niger Delta.”